The case starts all the way back in spring 2015 where we get the first inquiry. We keep an eye on the place and report it to the police several times without the horses getting better. A horse is put down after a few months and then no more happens. The case is ignored and we approach the police several times. The whole thing was very frustrating and was not improved by our complaint that nothing happened, was rejected and the case eventually closed by the police.

We approach all the places we can think of to do something for the poor horses, incl. the media who are not interested in the case.

We publish a press release where we tell about the case and lack of interest from the police and the media despite the horse’s condition.

Finally we discover that the horses have disappeared and find out that the black horse was sold to a horse dealer at Vordingborg. We get the horse redeemed and bring it home to New Horselife.

Police are closing the case as the horses have been sold. No one (the owner) has been charged in the case.

After we bought Kato, it took months before he gained enough weight. Kato revived and took care of the new horses that arrived in New horselife. It turned out that Kato was an amazing horse, patient and wise, and we all loved him. 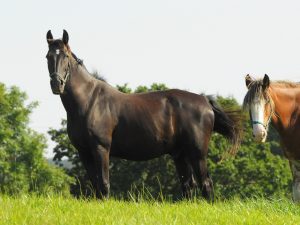